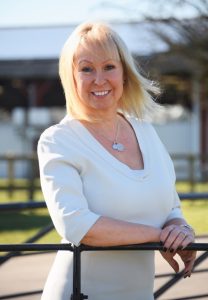 Bee, who this year celebrates the final year of her three-year stint at the helm of the county’s biggest and most prestigious annual showcase, was at its home, Trinity Park, for the annual general meeting of the Suffolk Agricultural Association, the farm charity which lies behind the event.

Bee’s two shows to date have been blessed with near-perfect show weather, which has helped to ensure a very healthy turnout, although it was her drive and her organisational skills that were heavily praised this week. 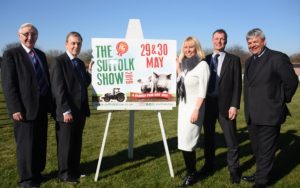 “She has had two amazing shows. This system we have of changing our show directors every three years must be right, but she keeps coming up with new ideas,” said SAA chair David Nunn, as he thanked the logistics boss for her “tremendous” efforts.

The SAA’s 188th AGM, on Monday, February 25, saw farmer Bruce Kerr installed as Bee’s deputy – effectively his apprenticeship before his own three-year term as show director. He will begin preparations for next year’s event on Friday, May 31, the day after this year’s show ends.

“You are still passionately involved and wanting everything to go right, but also sad it’s the last one, but ready to hand over to your successor,” said Bee. The third year was very much a ‘joint experience’ with her successor, she added.

Stephen Miles, a show stalwart involved for many years in running the show’s hugely popular flower and garden area, was voted in as president, taking over the reins from Baroness Hazel Byford.

His father took the role in 1994, he recalled, and as far as he himself was concerned, it was a great honour.

“I have got to know a huge amount of people, made a huge amount of friends, and my father before me,” he said. As a trustee of the Royal Agricultural Benevolent Institution (RABI), he would continue to highlight the plight of farming families in need, including in Suffolk, one of the top four counties in the country in terms of demand, he said. He is joined by Bill Kemball, Bee’s father, who becomes president-elect for the 2019 show.

Bill said he was “very proud”, “honoured” and “flattered” to have been chosen, and especially in following in his own father’s footsteps (president in 1993) in taking up the role. Bill started stewarding in 1959, around the time the SAA adopted its permanent home in Ipswich.

“During that time I have had a lot of fun,” he said. “I have got to know a lot of people I would not have otherwise met,” he said. 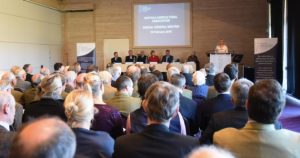 Bee thanked the SAA for its kind words. “It’s huge team effort,” she said. The 2018 show had welcomed 90k visitors, and although the weather predictions weren’t great, it had basked in good weather last year. She thanked her father for putting together a ‘looking back’ area of vintage farm machinery to help show-goers understand how the industry had evolved.

Among the records set last year were ones for the amount of trade stands and sponsorship, she said.

She had also been keen to ensure there were plenty of free activities and displays for showgoers to enjoy. “I do believe very passionately that that’s what gets our visitors back to our show,” she said.

Among the attractions this year would be a high viewing platform, and an “amazing” agricultural exhibition by farmer Brian Barker, who is putting together the story of oilseed production.

There was a “very exciting” increase in younger membership, but more work needed to be done to engage with members, she said. Behind the scenes, works had been carried out on irrigation at the showground, and other improvements, including to roadways.

The SAA said goodbye to Loudon Greenlees, its longstanding treasurer of 10 years, who has stepped down, but will continue to volunteer as a steward.