In the lead up to this year’s Suffolk Show a special ball was held at the Ringside Club Marquee at Trinity Park in Ipswich to raise money and awareness for three charities: 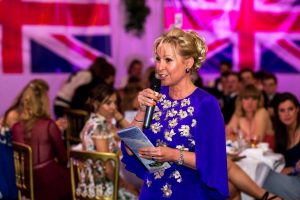 Debach MD (and Honorary Suffolk Show Director) Bee Kemball hosted the military themed ball for the 670 guests in attendance and an auction during the event that included luxury prizes such as hotel stays, clothing and a flight in a WW2 Spitfire raised £30,000 for the three charities.